The articles relate to my own art somewhat selfishly, but I have been getting excellent feedback, and to outside art and artists that interest me. 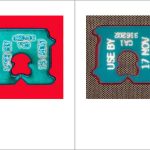 Following the success of my two opening exhibitions I set out to create a body of work in a new direction, but building on the inspiration that I began with. One driving idea was SIMPLICITY that is focusing down and trying to create meaningful work with minimal props. The other was the honing of skills and technique.

This was a completely new body of work ranging from quite large: the breadtag shape blown up to 66.5 x 66.5 cm and several works over a metre in size; to quite small: the extensive series of primal breadtags 24 x 24 cm. There was also one large sculptural piece

Science, technology and imagination meet and collide building up a complex palimpsest, where the viewer grows aware of the existence of different sorts and levels of reality. This idea is taken further in the different realities series, where the tags move into complex patterns as in Genetic Drift 1 or into actual three dimensional space in Louvres 4, somewhat precariously arranged on the Perspex panes of an actual louvred window permitting changes in the perspective of observation. (Sasha Grishin)

The exhibition Tag in 2005 was also well-received critically. 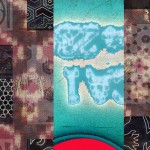 One exciting consequence of the Australian Art Collector 2003 article was an invitation by Rona Green to participate in an Artists Exchange Portfolio. this led to two collaborative endeavours with some of Australia’s major print makers ’23’ in 2003 and ’33’ in 2005. The number referring to the size of a square work and to the number of artists in each. 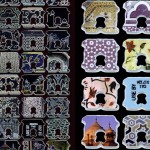 In 2003 Sonia Barron decided to include me as one of the rising stars on the basis of my two exhibitions in 2002, Use By and Transit. 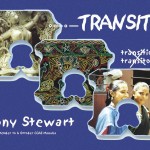 Transit in September, 2002 at Canberra Contemporary Art Space, Manuka was my first solo show. With 25 works it was a large expansion on Use By. The major piece Life Fragments 1 was and still possibly is my major museum piece. Imagine a Chinese Scroll 3.5 metres long containing hundreds of images of a life in an array of breadtag shapes and you will have some idea.

This is a very rich and rewarding exhibition, where cutting wit is combined with an engaging intellect. The large scroll image Life Fragments I, is the real show stopper, quite brilliant in its conception and execution. (Sasha Grishin)

It is unusual as an emerging artist to put so much variety of coherent ideas into into one’s first solo show. 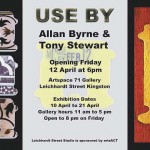 Without Allan Byrne’s support and that of some others my art career may never have taken off. Use By was a joint exhibition with Allan Byrne and my first foray into the art world. Use By was held at Artspace 71 Gallery in Canberra in April, 2002. Use By consisted of six works by Allan and 11 small works by me. Despite its small size and being slightly out of the way Use By attracted a little attention and even more surprisingly people remembered it for some years.

This is an exhibition which, in its exploitation of an object universally familiar and readily understood, is provocative and imaginative in its realisation; ranging across a broad spectrum of issues and ideas which concern us all. (Sonia Barron)

It is a provocative and probing exhibition which beautifully deconstructs aspects of our society, our dependence on technology and our phobias and obsessions.

There is a wonderful matter-of-fact understated quality in the show which is quite profound in its impact. (Sasha Grishin) 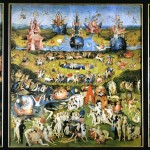 The article gives a quite detailed biography and description of Bosch’s art and its context in comparison with other Renaissance artists. A good number of images of Bosch’s art works and of excerpted images from those works illustrate the article. Some detail is also given to allusions and icons in Bosch’s art. I am personally attracted to Bosch as an artist and have used his images to make a point in my own work. 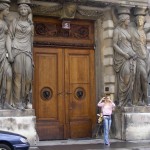 When we first went to Vienna in September 2007, I was rather taken by a rather Hapsburg Imperial, pompous but lovely statue in Michaelerplatz just near the Spanish Riding School. We had some time to kill before a performance at the Riding School and I spent that time perusing and photographing the statue I liked. It was part of a pair flanking the gate. the other was less interesting. Years later in writing this post I found out that the statue I liked was Power on the sea by Rudolf Ritter von Weyr 1895. Both statues are neoBaroque sculptures and an anachronism for the late 19th century. I think the photographs show how we can always be surprised by art and it doesn’t have to be world shattering to please and excite.

It is odd and a bit daunting putting up my art career slowly on the web but it does showcase my art to a wider audience and hopefully may stimulate me creatively as well. I certainly intend to keep going until I am up to date.

The other side of the coin is showcasing art and other artists that interest me. I have many ideas about this and I suspect the articles may well be as eclectic as some other areas of this blog. So far I have only done two posts in this area: Hieronymus Bosch and a 19th century neoBaroque sculpture in Vienna. This is probably a good start as the topics couldn’t be more different. It is early days yet.

Other parts of the Catalogue