Featured Image: The Zion Canyon camping area at Watchman on the Virgin River where hummingbirds flew over the river

The featured image shows just how adaptable specialist hummingbirds who migrate to North America are and have to be in the habitats they migrate through and to.

Hummingbirds are feisty and assertive out of all proportion to their size. They will chase off much larger birds from desirable flowers. They remind me of a little Maltese terrier of my sister’s. A white ball of fluff who had no idea that he was only a small dog. I stupidly took him up in the bush on Black Mountain one day and for a kilometre and a half with the dog in my arms had to fight off the frightening attacks of a pair of swamp harriers, who thought he was close enough to a rabbit for dinner.

I’d like also to use the word aggressive for the hummingbirds but in ethology (animal behaviour) ‘aggressive’ is not to be used, as it is both too vague and anthropomorphic to boot (putting human traits, emotions or intentions onto animals).

As a young person, I thought hummingbirds were incredibly exotic and I wanted to see one. I failed when I went to Canada and travelled through America, Mexico and South America in my early twenties (see Winnipeg and International Peasant Foods). I didn’t see a single hummingbird.

Consequently, I was excited when we went to the USA and Canada from May to July last year, at the hope of finally seeing hummingbirds in the wild. I saw my first hummingbird at the back of the commercial camping area in Zion National Park, flitting and hovering over the stream — the Virgin River. Steve our guide said that he’d seen them there on previous trips. It was adverse circumstances entirely — almost dusk and cold. It hailed while we had dinner half an hour later, up to six inches piled in drifts around our tents. And it snowed overnight.

The hummingbirds — there were two — must have been catching insects. They were midstream. And there were no blossoms nearby.

Later we saw hummingbirds in our AirBNB accommodation in Portland, Oregon, which was near the river, visiting flowers in the garden. We saw them in numbers at nectar-feeding stations in the Butchart Gardens near Victoria on Vancouver Island in Canada. We also saw them regularly close-up on our back verandah in Chilliwack Canada. They were visiting the pot plants and the blooming hedges nearby. This was during a three-week house-sit in the Fraser Valley on a property overlooking farmland and a snow-capped mountain.

We also saw hummingbirds at the end of our trip in San Francisco, while viewing the Painted Ladies (famous Victorian Houses) in Alamo Square Park. Although seemingly ubiquitous up the west coast, we never grew sick of seeing them.

Hummingbirds are named for their genus and species, as are all animals. Common names vary from place to place and are not a good guide to the species. Thus the Rufous hummingbird one of the species we saw at the Butchart Gardens has a scientific name of Selasphorous rufus and Anna’s Hummingbird is Calypte anna. The first word is the genus and the second the species, respectively. We also saw hummingbirds at the end of our trip in San Francisco, while viewing the Painted Ladies (famous Victorian Houses) in Alamo Square Park. Although seemingly ubiquitous up the west coast, we never grew sick of seeing them.

Scientific names are always in italics (or underlined to indicate italics). The genus is capitalised and the species is lower case. What one can learn from the scientific name instantly is that the Rufous hummingbird and Ana’s hummingbird are not closely related because they are not in the same genus.

The scientific system of classification for plants and animals (and everything else, fungi, microbes and viruses) is called the Linnaean system of taxonomy. The system comes from Carl Linnaeus (1707-1778) a Swedish naturalist, before that it was not always possible to precisely identify living things.

(If you want the videos immediately, skip to the end.) Hummingbirds are native to the Americas only. Most hummingbird species live in Central and South America. Only 16 species are found in North America and only a few hardy species reach Alaska.

I will use the IOC common names mostly from now on, as some readers will be put off by the scientific or Latin names. 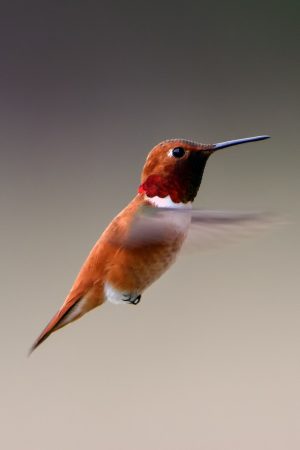 Hummingbirds are among the smallest birds in the world. The smallest being the Cuban Bee hummingbird (Mellisuga helenae) at just five to six centimetres long and two grams in weight.

All are small nectar feeding birds but they are very diverse and specialised. Bills come in a large variety of lengths and shapes, from completely straight to very curved, depending on the type of flower they like to visit.

The specialisation to particular nectar resources results in less competition between species and allows for species rich ecosystems of hummingbirds to develop. The downside of this is that specialists are very vulnerable to changes in circumstances.

Hummingbirds hold yet another record among birds. The Sword-billed hummingbird (Ensifera ensifera) lives in the high Andes and is the only bird in the world whose bill is longer than its body. It is often seen sitting with its head held vertically to keep balance.

Hummingbirds and flowers have co-evolved in a similar manner to bees and other insects.

Most birds fly with upstrokes and downstrokes generating lift and power on the downstroke. Hummingbirds stroke their wings forward and back, pivoting up to 180 degrees at the shoulder. They hover with a figure-eight motion of their wings. This flexibility plus rapid wing beats and light weight allow the hummingbird to perform aerobatics that other bird species simply can’t. It is a completely different style of flight.

Hummingbirds are different from other birds in the iridescence of some of their feathers especially males. Light bounces off of them like off a soap bubble or oil slick. One moment the feathers are an unbelievably iridescent colour, red, green or blue the next they are dull. The feather melanosomes (the organelle structures responsible for colour) are flattened or pancake-shaped and contain lots of tiny air-bubbles, which accounts for the spectacular shimmer. Hummingbirds hover in mid-air at rapid wing-flapping rates of 12 beats per second in the largest species to more than 80 beats per second in some of the smallest. Of the species whose flight has been measured in wind tunnels: their top speed exceeds 15 m/s (54 km/h; 34 mph), and some species can dive at speeds in excess of 22 m/s (79 km/h; 49 mph).

Hummingbirds have the greatest mass-specific metabolic rate of any homeothermic animal, i.e. more than mammalian shrews of similar size.

To conserve energy when food is scarce, or nightly when not foraging, hummingbirds can lower their body temperature and metabolic rate by going into torpor. Torpor is state similar to hibernation but it is only temporary.

By relying on newly ingested sugars to fuel flight, hummingbirds can reserve their limited fat stores to sustain overnight fasting or to power migratory flights.

Hummingbirds have long lifespans for organisms with such rapid metabolisms. Though many die during their first year of life, especially in the vulnerable period between hatching and fledging, those that survive may occasionally live a decade or more.

Hummingbirds in flight utilise huge amounts of oxygen. Yet, some species are adapted to live at high altitude in the Andes (4000 metres or 13,000 feet). Research has shown that these species have genetic adaptations at two locations in their red blood cells that enable them to absorb oxygen with great efficiency at high altitudes. Some hummingbird species migrate north in summer and winter in Mexico or Central America. For example, the Rufous hummingbird and Anna’s hummingbird mentioned migrate up the west coast of the USA and Canada. The Black-chinned hummingbird is more in the south and west below Canada and the Ruby-throated hummingbird migrates up the eastern side of the USA with a group drifting west once the species reaches Canada.

Hummingbirds migrate by day except in one situation. The Ruby-throated Hummingbird doubles its weight by gorging to add fat as an energy reserve. It must fly non-stop across the Gulf of Mexico a distance of 500 miles (800 km) and keep going once night falls. They are capable of flying 600 miles without stopping in good weather (nearly 1000 km).

As you can see, unless you are a professional wildlife photographer, one’s photographs of hummingbirds when travelling tend to be ordinary. Hence I am showcasing some hummingbird photographs that do not require a licence for non-commercial purposes. I hope you might visit their photography sites where possible. I include Charles J Sharp’s web site, but cannot find the others. Basic video of one bird at a feeder. Pleasant (3 min 42 seconds)

The Hummingbird whisperer. Cute video about a French assistant in Geology at UCLA (2 min 22)

Another educational video by National Geographic (1 min 31 ). But with an annoyingly long advertisement.

Scientific Names and the Classification of Animals

For my general and basic biology of hummingbirds, I used the Wikipedia Guide. Although it is much more detailed than my information above. I also used Arizona State University Ask a Biologist and Science Nordic on hummingbirds.

For migration I found Hummingbird Central and The Journey North useful.

For flight The Spruce has a useful article.

Hummingbirds are different from other birds in the irridescence of some of their feathers. Their melanosomes (the organelle structures responsible for colour) are flattened or pancake-shaped and contain lots of tiny air-bubbles.

EurekAlert has an excellent article on this.