We spent five days at New Year at Lake Tabourie with Judy, Neil and other friends. It was a wonderful time with good food, wine and friendship in a relaxed and delightful atmosphere. A great beginning to 2018.

I realised that I have been going to Lake Tabourie for 52 years, a frightening thought.

When I was much younger the family began to go to Lake Tabourie in summer for a few years. That is, until we refused to go anywhere with our parents any more. We stayed in a converted garage on another property then.

Since, I have been privileged to use Judy’s house regularly. Judy’s father bought the house in the early 1950s. The house continues to have a 1950s character but with 2017 facilities. Judy and Neil have done an enormous amount of work to achieve this.

The Lake from the House

Lake Tabourie is a small holiday village on the South Coast of NSW between Batemans Bay and Ulladulla. In comparison, other coastal towns in the area tend to have better facilities, but to be full of ‘red-brick’ suburbia.

I remember a family who bought a coast house in the 1970s that was a miniature version of their suburban home in Canberra. I’ve always hated this type of coastal development because I believe in a type of holiday house dwelling that is different to what one has at home. In this respect I probably have a ‘coast shack’ mentality.

Batemans Bay is where the King’s Highway from Canberra reaches the coast.

The South Coast of NSW View towards the Beach from near the House

The South Coast of NSW, located south of Sydney, is still remarkable. It stretches from Wollongong in the north (which has almost become a dormitory suburb of Sydney) to the Victorian border. In many places the spotted gum forests and other coastal trees and scrub extend right to the water’s edge.

This preservation of native vegetation doesn’t happen much anymore elsewhere on the east coast of Australia. The North Coast of NSW north of Sydney is more extensive but the remnants of natural bush and coast are widely separated.

We lived in Brisbane for over a year at the turn of the millennium. Whilst there, we visited the Gold Coast and Sunshine Coast regularly.

I knew how the Gold Coast had become citified, but expected more of the Sunshine Coast. However, apart from some small areas around Noosa, there is no native bush or sane development anywhere. This is a hangover from the rampant development and corruption of the Jo Bjelke-Petersen era. My rose-coloured glasses did not last.

Nevertheless, we spent a month of winter in July last year house-sitting in the Noosa hinterland. Inland from the beaches, even close to the coast there is native vegetation. Up on the Blackall Range and in the Glass House Mountains are spectacular places over the other side of the freeway. I wouldn’t want to put you off going.

And the water is warm nearly all year round. Unlike the South Coast in NSW, where I won’t go swimming except from New Year to the end of February or early March — perhaps extending as climate change kicks in.

There has been a massive population shift to the coast going on for at least thirty years in Australia. As people like living near the sea and in cities and no longer like living in the interior, away from both. Judy’s house where I stay is on the narrow end of the lake towards the beach. See the advertisement on Stayz for some nice photos of the house and environs and also because you too could stay there.

The beach is about a 5-10 minute walk, depending which way you go. The walk to the beach is beautiful through native bush. The stretch of coast and Crampton island are magical.

There are two beaches. North of the island and the lake entrance (when open) is Wairo Beach a 5 kilometre exposed beach backed by dunes, which were once up to 30 m high (destroyed in the 1970s). The northern end of the beach ends at Dolphin Point opposite Lake Burrill township. At the Crampton Island end the beach is often sheltered depending on the wind direction.

South of the island is South Beach often good for surfing and beach fishing. South beach stretches 1.7 km to South Rocks and about 2 km to the next beach — a short curved beach bounded by beautiful rock platforms.

I have used the minutiae of both rock platforms for photography and to create artworks.

A Canadian friend who visited Lake Tabourie with me for a week in the 1990s thought that it was one of the most beautiful places he’d ever been.

Another friend said years ago that we should put up a real estate sign on the beach beyond South Beach and take a photograph. People elsewhere in the world would not understand how such a beautiful beach with stunning rock platforms either side could be empty most of the year, with no houses within two kilometres one way and seven the other.

I don’t want to diminish the remainder of the South Coast as there are other wonderful places that other people love as much.

Indeed, there was an article in Saturday’s The Canberra Times newspaper (13 January, 2018) that said that Hyam’s Beach on Jervis Bay has reputedly the whitest fine sand in the world. This has led to thousands coming to see it, which the locals hate. I should mention that Lake Tabourie has yellow sand, which is no different than a hundred other places. South Beach and Beyond

Judy says that when some people come up to the unremarkable back entrance to the house (1950s fibro) that they can’t believe the wonderful view onto the lake from the front. I can remember from my early years there, what a joy it is when you arrive in the dark to find the view in the morning, especially when the bed in the main bedroom was higher and you could view the lake from bed without getting up. Lake Tabourie is unusual for the South Coast in that because it is surrounded by National Park it can’t become built-out. And unlike other parts of the coast that have become basically ‘red-brick’ suburbs, it still retains its old-fashioned charm. Along the lake, although there are some more modern houses, there are no coastal ‘palaces’. There is still a 1950s aura about the place and there are few facilities. Consequently, property values are lower than elsewhere — go figure.

Climate change is helping too, because local councils are now terrified of being sued in the future. The low swampy part of the lake near the bridge on the highway has dwellings on it that should never have been built and is subject to flooding now. It will have major problems, if there are storm surges later on, but the rest of the community is fine. However, you can only renovate existing buildings on the lake or be forced to build new houses on stilts at the back of the plot away from the lake, which further protects the area from over-development.

There is a large Council camping area across the lake, also a nice place to stay, but it is shielded from view from the village by mature thick bush.

Few people who don’t know Lake Tabourie stop their drive along the highway to look around, because the strip of houses, a motel and the newly done-up Tucker Box general store and petrol station (a mixed blessing) are not enticing. (These are the last remaining businesses — there were never more than four.) There is nothing on the highway to make one want to turn into the village. Similarly, the camping ground doesn’t display its virtues at the turn off into the bush. Crampton Island on a Grey Afternoon

Surprisingly, Denise’s mother lived at Lake Tabourie from when she was born until six years of age. Denise had been with me to Lake Tabourie a few times before she mentioned it to her mother and found this out. Denise’s grand parents on her mother’s side farmed a small dairy holding owned by another relative on the other side of the highway. They sold milk to the holiday campers at Lake Tabourie during the Great Depression.

There is a small museum at Lake Tabourie on the Highway, which covers the early days from the mid-1800s. Lake Tabourie when we first went there and into the 1970s was superb for lake and beach fishing. There were runs of prawns in the lake and when one went snorkelling around the island and the rocks beyond the sea teemed with fish. This is no longer the case. Although plenty of fishing still goes on.

When I did a snorkelling survey around the island during my first scuba diving training at Batemans Bay a few years ago, the area seemed to have been denuded of fish. This is almost entirely due to over-fishing.

However, a marine exclusion zone at Batemans Bay seems to be having a positive impact on fish stocks, as have similar marine reserves I have seen in New Zealand, so there is hope for the future.

Although the beach is only minutes away, there are longer walks through the banksias and eucalyptus forests behind the primary dunes of the beach. One favourite walk takes you south through the settlement and into the forest on a track through the National Park one arm of which leads to South Beach near the South Rocks (also called Stokes Island). There you can either turn right to access further beaches or left to walk back along the beach towards Crampton Island and complete a circuit.

There is also a walking track further through the bush to Sunburnt Beach campground and Termeil Point campground. Both are wild camping, which means no facilities other than toilets. The second is beside Lake Termeil an interesting lake on Termeil Creek, which is surrounded by bush.

A longer walk through the Meroo National Park is from Lake Tabourie to Bawley Point about 10 or 12 kilometres. On the way you pass another wild camping area at Meroo Head, which is beside the large Meroo Lake and Reedy Creek.

There are many nice places to stay along the South Coast but for me Lake Tabourie and Meroo National Park are completely special. View Across the Lake from the House

Other Postcards are from: Boudhanath Stupa, Dubai, Vienna, Rock of Cashel.

The following are some of my artworks based on photographs taken around Lake Tabourie.

This illustration and Lake Tabourie 4 are two of four artworks based on the rock platforms (mentioned) at Lake Tabourie. This consisted of a rough wooden frame and an old louvre window from Judy’s house in O’Connor with four Perspex louvres containing bread tag images of the rock platforms (mentioned) at Lake Tabourie. The illustrations show the finished piece and the four Perspex panels. The artificial coastal background to Sargasso Christ was constructed from photographs of seascapes, water, rocks and seaweed from Lake Tabourie and other locations along the South Coast of NSW. 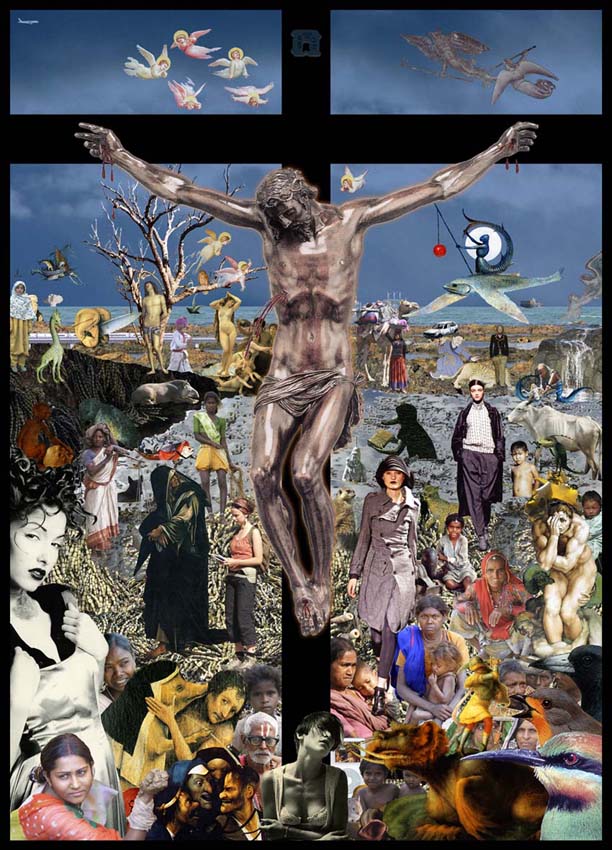 Wikipedia on The Sunshine Coast

The South Coast of NSW

Wikipedia on The South Coast of NSW