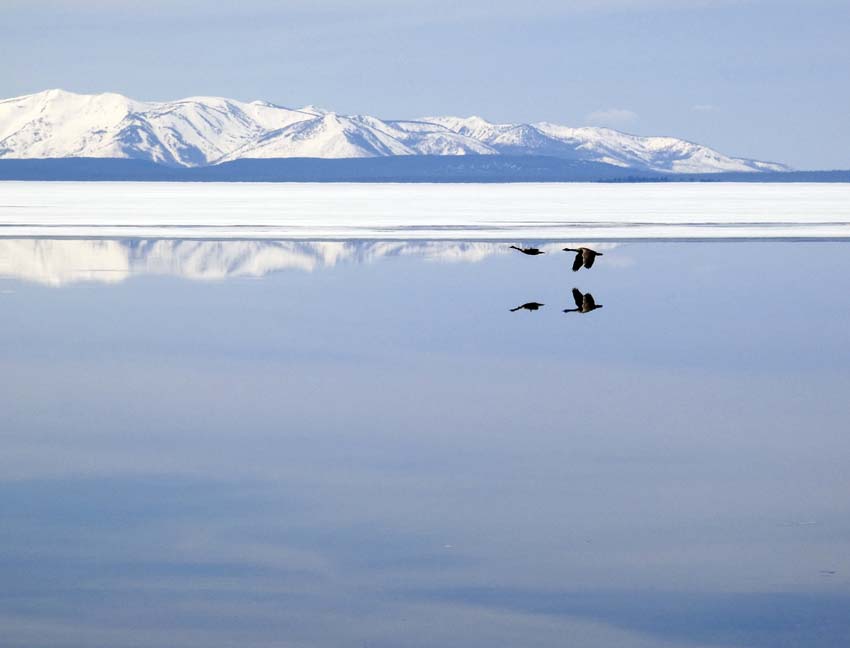 I mentioned in my recent article Wolves, Bears, Yellowstone that Yellowstone National Park was the first destination on a tour of western national parks on 9 May 2019. 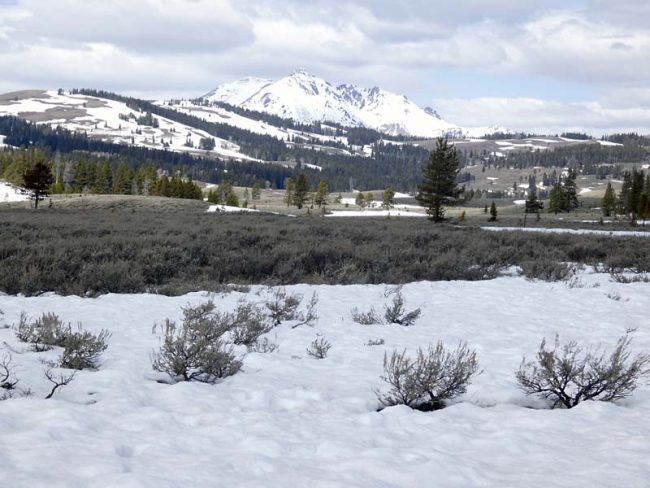 Late Spring, Yellowstone has just opened for the season and there is still plenty of snow

Before we joined the tour Denise and I hired a car and drove from Bozeman, Montana to Cody, Wyoming and back to visit the Buffalo Bill Center of the West in Cody (also mentioned in the previous article). On this drive we skirted the northern boundary and part of the eastern boundary of Yellowstone and saw the mountains of the northern portion of the park for most of the drive. The morning we left Cody it snowed heavily and the hills and mountains were freshly covered with snow on the eastern boundary. Except for the northern and north-eastern connection roads most of the other roads inside the park were closed up to a week or so before we arrived and up until a day or so before we started. There was still at least one road closed while we were there. Cody is the gateway to the Eastern Entrance of Yellowstone. On our last evening in Cody we went to hear live music at a boutique hotel. The folksy country singer was based in Texas but originally from near Cody. As an introduction to one of his songs, he talked in pejorative terms about a visitor to the park who complained about the distances and the number of animals on the road. Yellowstone is big and that is one of its main attractions. I list below some of the distances and times it takes to get around the park from its northern end. On March 1, 1872, Yellowstone became the first national park for all to enjoy the unique hydrothermal wonders. As development spread across the West, the 2.2 million acres of habitat within the park became an important sanctuary for the largest concentration of wildlife in the lower 48 states. (National Parks Service) They should no longer say Yellowstone was the first national park in the world, as mentioned in my previous article, there was an earlier one in Mongolia. The map and brochure visitors receive says:

We saw all but the last two animals in our three days in Yellowstone and much more besides, particularly on our guided wildlife morning described in Wolves, Bears, Yellowstone. In this article I’ll concentrate on the thermal wonders and other natural features of the park. Of the former the brochure says:

At the heart of Yellowstone’s past, present and future lies a supervolcano. Huge volcanic eruptions occurred here, the latest about 631,000 years ago. The center of what is now the park collapsed, forming a 30-by-45 mile [50-70 km] caldera or basin. The heat powering those eruptions still fuels the park’s geysers, hot springs, fumaroles, and mudspots. (National Parks Service Brochure & Map)

Yellowstone National Park at 3,437 square miles (8,903 sq km) is very large but still not large enough for the wildlife it supports. The current caldera and two older ones occupy most of the centre of the park. The supervolcano refers to the hotspot under Yellowstone, which means that the magma reservoir is closer to the surface than elsewhere. There are twenty supervolcanoes around the world but Yellowstone is the largest. Although there is plenty of wildlife in the Yellowstone caldera, the north end of the park contains more wildlife and also other major features including: Yellowstone’s Grand Canyon area, the Lamar Valley and most but not all of the mountains. The mountain ranges on three sides of the north end of the park are the Gallatin Range (west), the Washburn Range (in the middle) and the Absaroka Range (east) which extends down the eastern boundary. Other mountain ranges are the Red Mountains to the south of the caldera and several isolated peaks. There are 70 named peaks over 8000 feet (2400 m) but the majority are over 10,000 feet (3050 m). I was surprised that inside the caldera the lodgepole pine (Pinus contorta) appeared almost a tree monoculture. The forests of Yellowstone consist of five conifer species. Lodgepole pine is the most dominant covering as much as 80% of the park. The other four conifers are whitebark pine (Pinus albicaulis), Douglas fir (Pseudotsuga menziesii), Engelmann spruce (Picea engelmannii), and subalpine fir (Abies lasiocarpa). There are also large areas of grassland. Close up of the Travertine Terraces at Mammoth Hot Springs

At least a dozen rivers flow through Yellowstone, not surprising given the number of mountains it contains. The environment is both lovely and varied.

You may have come across the term Greater Yellowstone Ecosystem. This is an area of 18,750-34,375 square miles (sizes boundaries and areas of any ecosystem can vary — an interesting quotation). It emerged in the 1970s and 1980s as a theoretically much larger area than Yellowstone, necessary to preserve the wildlife and habitats of the American Rockies northwards. It is not uncontroversial. The Greater Yellowstone Ecosystem includes Yellowstone as its pivot, as well as Grand Teton National Park, the Wind River Range and the Gros Ventre Wilderness. It also encompasses the Lee Metcalf Wilderness (established 1983), another national wildlife refuge, parts of five national forests, Bureau of Land Management holdings, private and tribal lands. Together, they make up the southernmost range of grizzly bears in North America, a region that is home to large herds of elk, bison and antelope, and several wolf packs. We left Bozeman on the morning of 9 May and set-up camp in a beautiful spot on the river just outside of Gardiner. We were a party of seven, including the guide Steve, which was lucky, perhaps because it was the first trip of the season. All of us thought 14, the maximum, would have been too many. We drove in through the northern entrance past the Albright Visitor Centre and Mammoth Hot Springs stopping only briefly as we were headed for Old Faithful Geyser. There were roadworks enroute, which were one-way and slowed everyone down. This is typical at this time of year because of damage to the roads over winter Our Campsite near Gardiner

Further on, we passed about one hundred or more wildlife photographers on the side of the road with wonderful equipment mostly Canon bodies and large Canon professional telephoto lenses. They were part of a group or a club and had been taking pictures of black bear. It was shock to me as one normally thinks of wildlife photographers as craggy professionals who spend months on their own in the wild. Hence despite the gear I think that they were mostly amateurs. We stopped at a few places briefly to take in the view and had lunch at Indian Creek, but we were focused on Old Faithful. We were lucky as the geyser erupted on schedule about fifteen minutes after we arrived. Unlike anywhere else we went there was a large crowd to witness the eruption. The visitor centre and Old Faithful Inn were crowded. The Old Faithful Inn was opened in 1904 and is the largest log hotel in the world. It was designed by Robert Reamer and is an example of golden age, rustic resort architecture (Wikipedia), if there is such a thing. The massive gabled log structure forming the lobby is fabulous. Old Faithful itself was very impressive and a must see but I preferred some of the other thermal features we visited later on. I think travelling early in the season is a good idea for all the western national parks, as they get very crowded later in the summer. On the way back to Camp and Gardiner we stopped at the Midway Geyser Basin for about an hour. We also stopped briefly at Beryl hot springs because I insisted and at a couple of other spots including the Albright Visitor Centre for a break and to look at the bison and the newly born ‘red dogs’ (baby bison). It was dark when we got back to camp. Denise and Steve went off to buy food. She was on the cooking team for the night and insisted on buffalo mince though it was expensive. We had buffalo hamburgers, which was the start of semi-gourmet meals whenever we cooked.

Before dinner we met our wildlife guide for the morning and had a beer or two with him. In the event, he couldn’t make it but his replacement a woman was excellent, exceedingly competent, knowledgeable and engaging. We had to get up before dawn and met our guide at the Albright Visitor Centre and then headed west towards the Lamar Valley. What we saw is described and shown in Wolves, Bears, Yellowstone. (However, I have included below a photograph taken with my ancient iPhone 4 of a grizzly bear and her cubs, as I was gobsmacked that one can take photographs with a phone through a spotting scope and they were better than those taken at long range with my bridge camera.) The vistas of the Lamar Valley were lovely. After the wildlife tour, we diverted down a road into the upper Yellowstone Grand Canyon, which was spectacular. We stopped this time at the Albright Visitor Centre for an extended visit. We saw a great horned owl as soon as we arrived and more ‘red dog’ baby bison amongst the adults. A ranger was on hand to discourage people from getting too close. People are stupid and bison are dangerous. We also went for an extended walk around the Mammoth Hot Springs, which are without doubt the most spectacular thermal feature of Yellowstone. And, in my mind come close in sheer beauty to the pink and white terraces in New Zealand, buried in the eruption of Mount Tarewa in 1886.

For a change it was still daylight when we got back to camp. Even though today was to be a long drive to Salt Lake City, we packed up camp reasonably early and set off for a further explore of places we hadn’t been before including Lake Village and an excursion past Fishing Bridge to Mary Bay to view a frozen part of Yellowstone Lake on the road towards the East Entrance and Cody. Then we turned west and exited Yellowstone through the West Entrance turned south and shortly thereafter entered Idaho. We did pretty much the tourist trip, the two and a half day minimum visit. It would be easy to spend a week or more in Yellowstone National Park. Other activities include day and multi-day walks to various destinations, kayaking and many other guided and non-guided adventure activities. Wikipedia on the Yellowstone Caldera

US National Parks on the Greater Yellowstone Ecosystem

Yellowstone to Yukon Conservation Initiative on the Greater Yellowstone Ecosystem

Wikipedia on the Greater Yellowstone Ecosystem The Grand Canyon of the Yellowstone

Wikipedia on the Grand Canyon of the Yellowstone

There are plenty of other day and multi-day hikes in Yellowstone. Hiking & trekking, kayaking guided services and other adventure activities are also available.

I mentioned in my other recent article Wolves, Bears, Yellowstone that one could take pictures through a spotting scope with one’s phone. Here is one example taken with my old iPhone 4. Whilst those through my Panasonic bridge camera where all blurred.